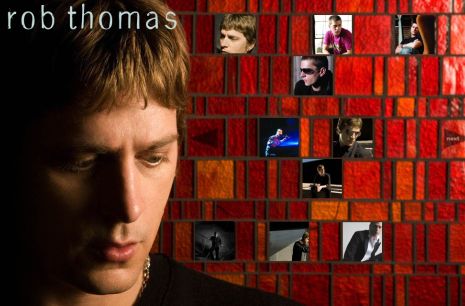 Through An Array of Digital Platforms, Rob Thomas Fans will be Provided
Exclusive Access to his Latest Album ‘cradlesong’
In stores and online today

Multiple Grammy-winning music superstar Rob Thomas and Atlantic Records, currently the #1 label in music, today announced the launch of Fanbase Mobile for the iPhone. Rob Thomas, who’s established himself as an innovative and influential thought leader in the digital media space, is harnessing the power of the Fanbase suite of applications (mobile, desktop, social and connected CD) to help launch his latest album, cradlesong, (Emblem/Atlantic) out today, and further his already powerful digital connection with his fans.

Much like the Fanbase desktop application, Fanbase Mobile is designed to provide fans a deep, content driven artist experience that lives on the iPhone and is available at the iPhone App Store. Amplifying the capabilities of traditional mobile apps, Fanbase Mobile aggregates both official and unofficial Rob Thomas related content available online, such as news and content, and delivers it directly to a fan’s iPhone. In addition, fans will be able to follow Rob on Twitter, listen to clips from his albums, read lyrics, watch videos, leave Rob voicemails via Saynow (www.saynow.com) and post messages to chat with other fans. The app will also soon include two fun Rob Thomas games titled ‘Inner Beauty’ and ‘Reverse Barbershop.’

Beyond Fanbase, Rob is also launching an array of digital initiatives to bolster his connection and dialogue with fans. Through a partnership with BlackBerry, Rob will launch the first-ever mobile artist app on the BlackBerry platform available to fans for free. Additionally, Rob is launching a 2.0 version of his highly successful USB wristbands. The new version will include a Flash Micro SD card which will allow audio and video files to be uploaded and played on PC’s, laptops or any Micro SD enabled mobile phone. Fans can go to www.robthomasmusic.com to purchase the wristband that will also include bonus content such as lyrics, videos and the digital booklet amongst other things. 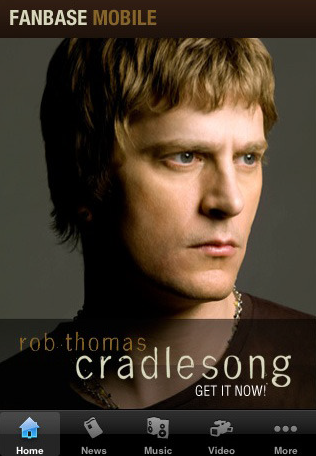 “A key factor in the successful collaboration I’ve had with Atlantic is their dedication to leveraging digital platforms like Fanbase Mobile to keep fans connected to my music, my life and fellow fans,” said Rob Thomas. “That’s a powerful experience and in today’s music industry it’s one the fans have responded to very positively.”

Rob Thomas’ second solo album “cradlesong” is the follow-up to his record-setting solo album “…Something to Be” which debuted at #1 on the Billboard chart and marked the first time a male artist from a rock or pop group debuted at #1 with his first solo album. The first single off “cradlesong,” “Her Diamonds,” already gave the multi-platinum singer songwriter his best Hot 100 start in his 16th overall trip to the Billboard chart and continues to grow at radio.

Rob Thomas is one of the most distinctive vocalists and accomplished songwriters in contemporary music, garnering a string of accolades – both for his work as lead singer and primary composer with matchbox twenty as well as for his solo work and collaborations with other artists. In 2004, the Songwriters Hall of Fame presented Thomas with its premiere “Starlight Award” – created to recognize a songwriter in the early years of his or her career that has already made a lasting impact. He has won numerous BMI and ASCAP Awards, and has earned the Songwriter of the Year crown from both Billboard and BMI, two years in a row.

Thomas has written and performed a remarkable string of hits, including matchbox twenty’s #1-charting “Push,” “3AM,” “If You’re Gone,” “Bent,” “Disease,” and “Unwell,” plus such favorites as “Real World,” “Back 2 Good,” “Mad Season,” and “Bright Lights.” His smash collaboration with Santana, the Thomas-penned “Smooth,” earned Rob three Grammy Awards and ranks #1 on Billboard’s “Top Hot 100 Rock Songs” chart and #2 on the magazine’s “Hot 100 All-Time Top Songs.” He has also worked with the likes of Willie Nelson, Mick Jagger, Marc Anthony and Bernie Taupin. Combining all of his projects, Thomas has contributed to sales of more than 80 million records.